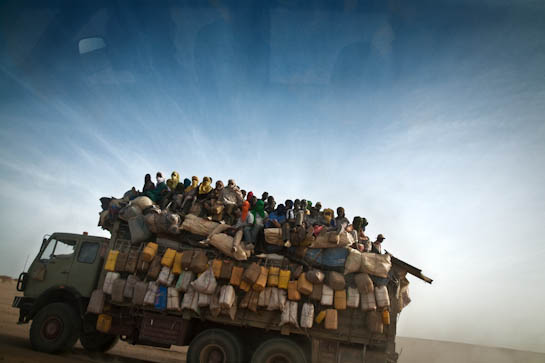 Niger Ð Agadez. 6th April 2009. After a wait of over 8 hours in the full glare of the sun the order to move has finally arrived. The soldiers use remote-controlled planes to ensure that the area is free of bandits or rebels and in the meantime, together with the police, they check the trucks and their passengers. This precaution was not sufficient to prevent an ambush the day after departure. Four trucks, officially transporting cigarettes, were assaulted and robbed. Fortunately no passenger trucks were involved in the episode. The convoy of 6th April counted about 47 trucks, of which at least 25 were carrying an average of a 130 to a 150 migrants. Many of these, once they reach Dirkou, will attempt the Lybia route